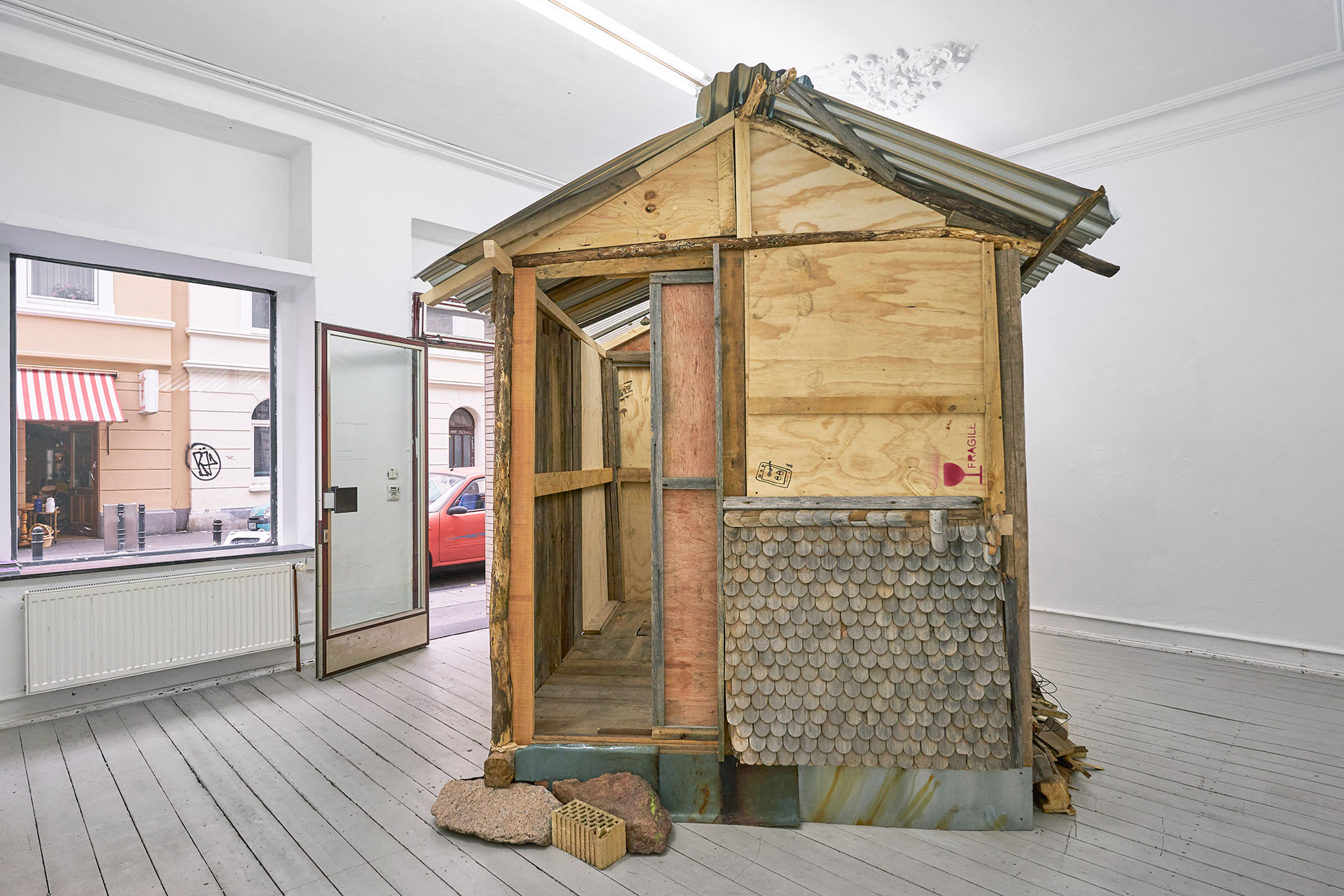 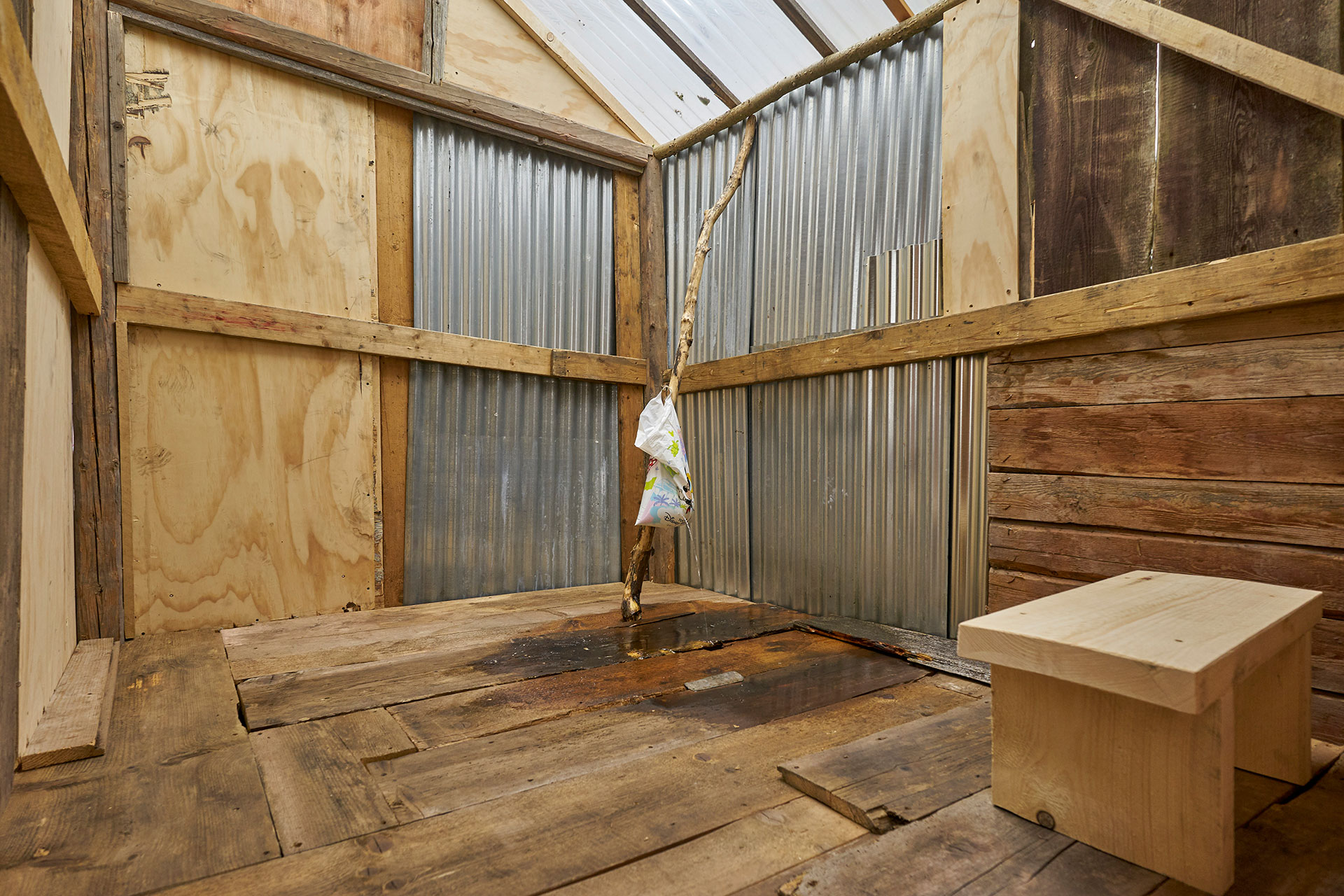 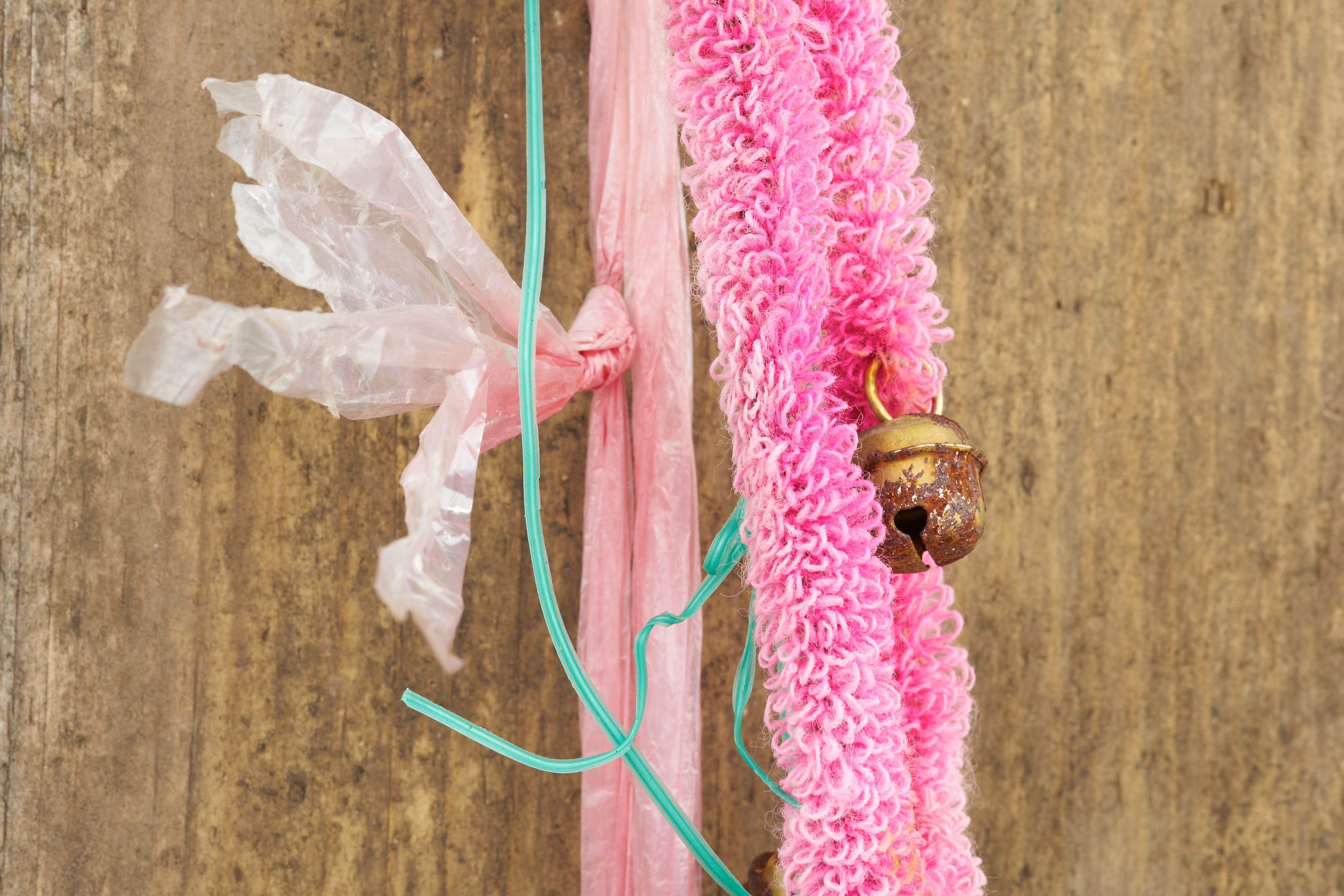 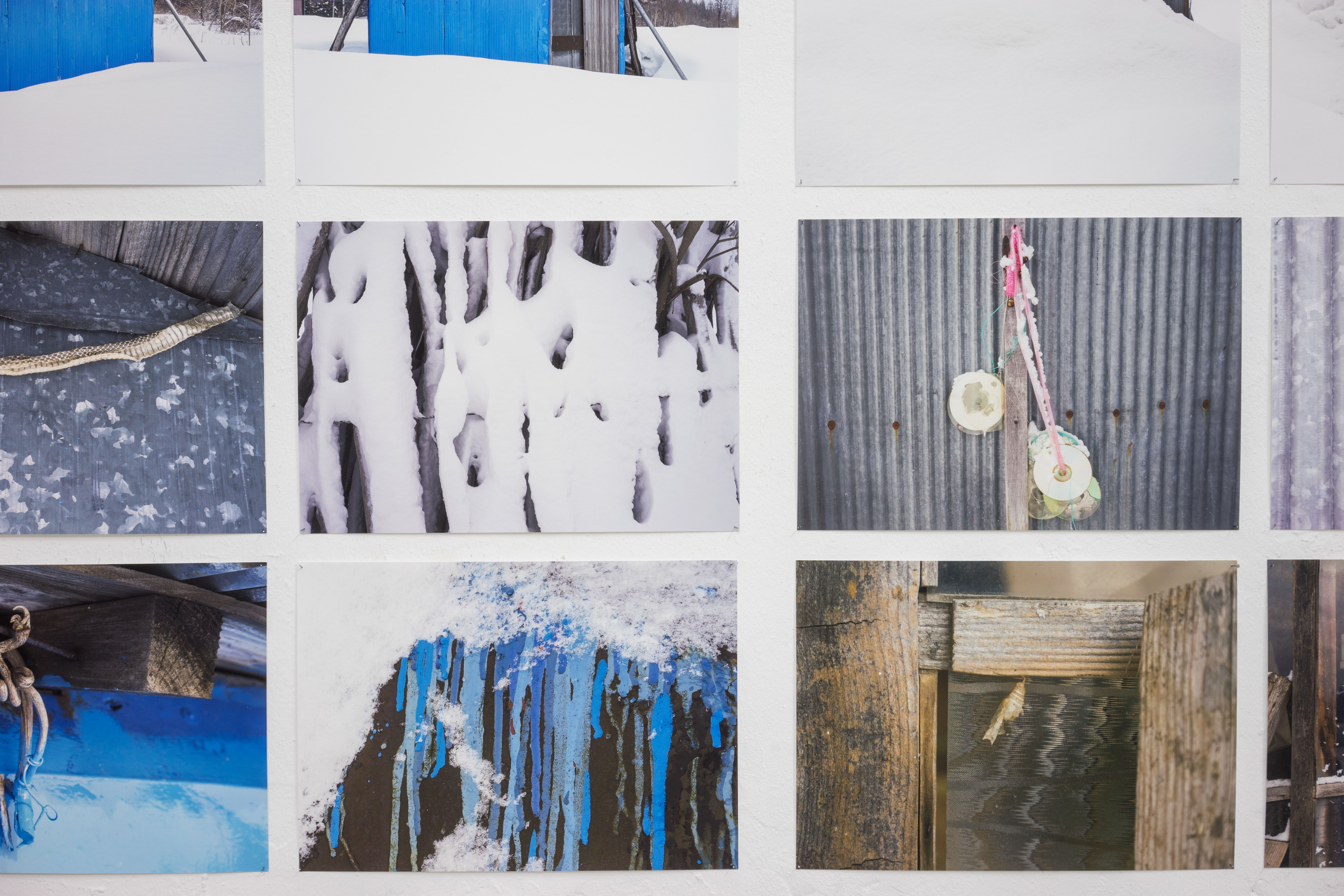 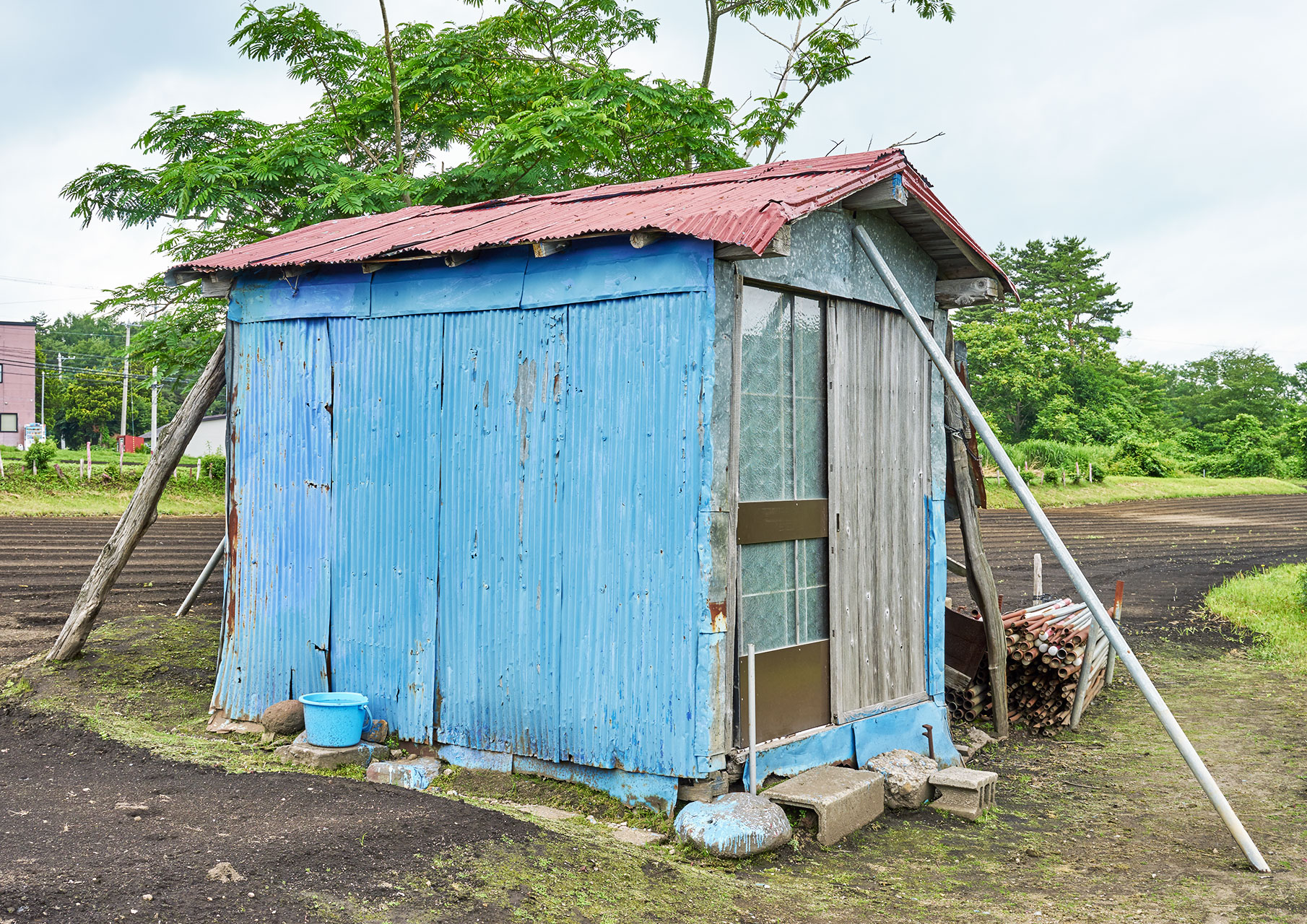 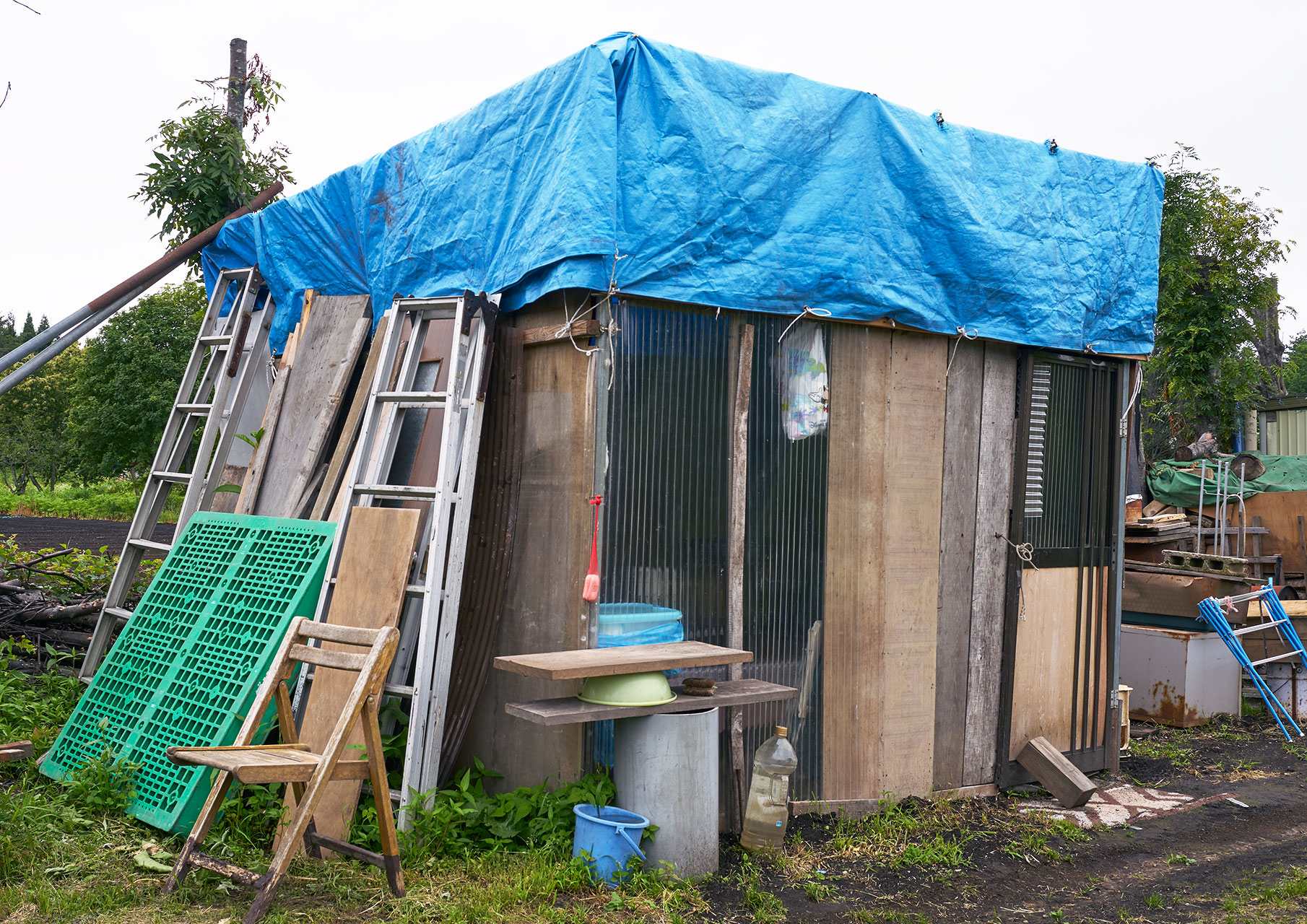 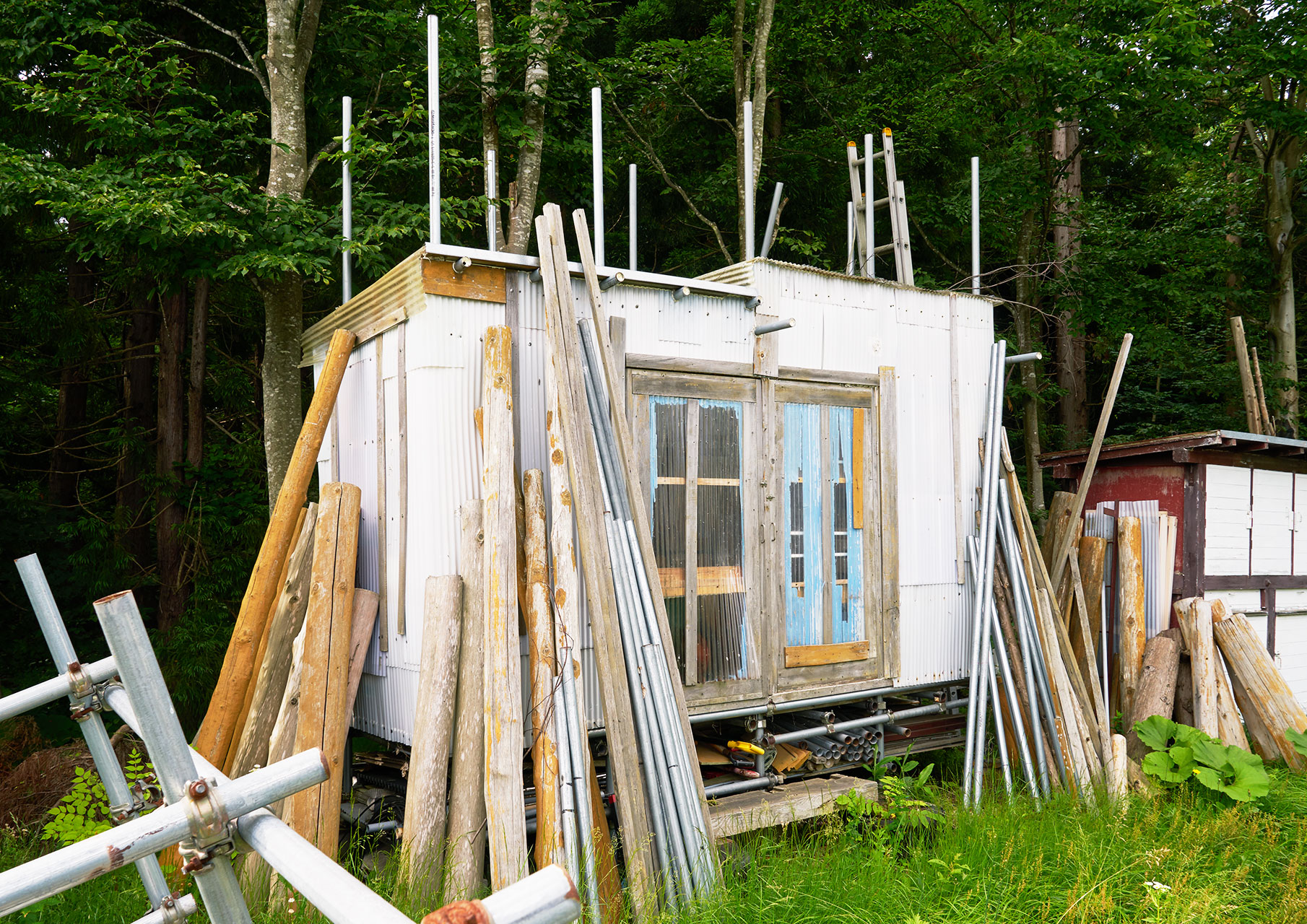 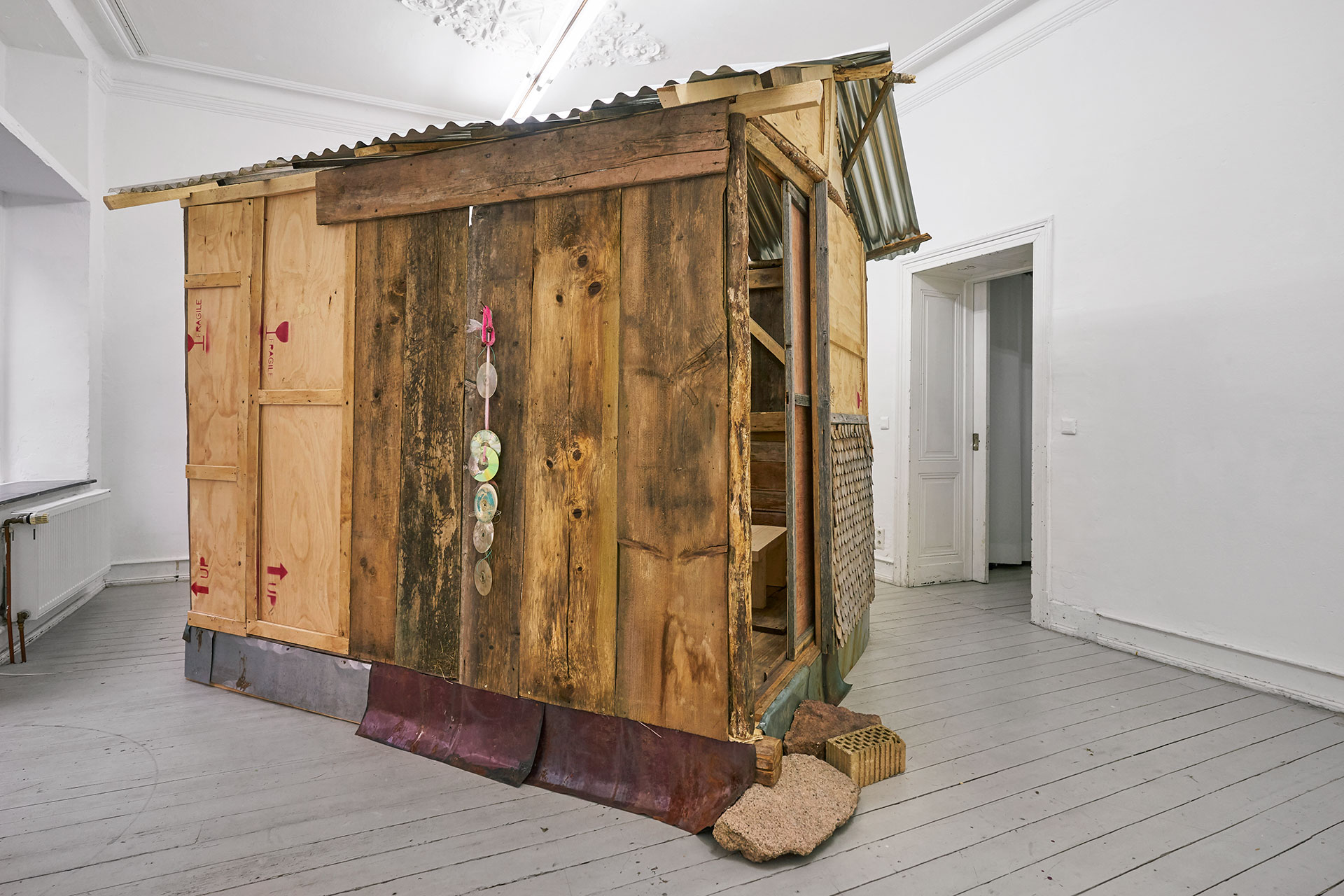 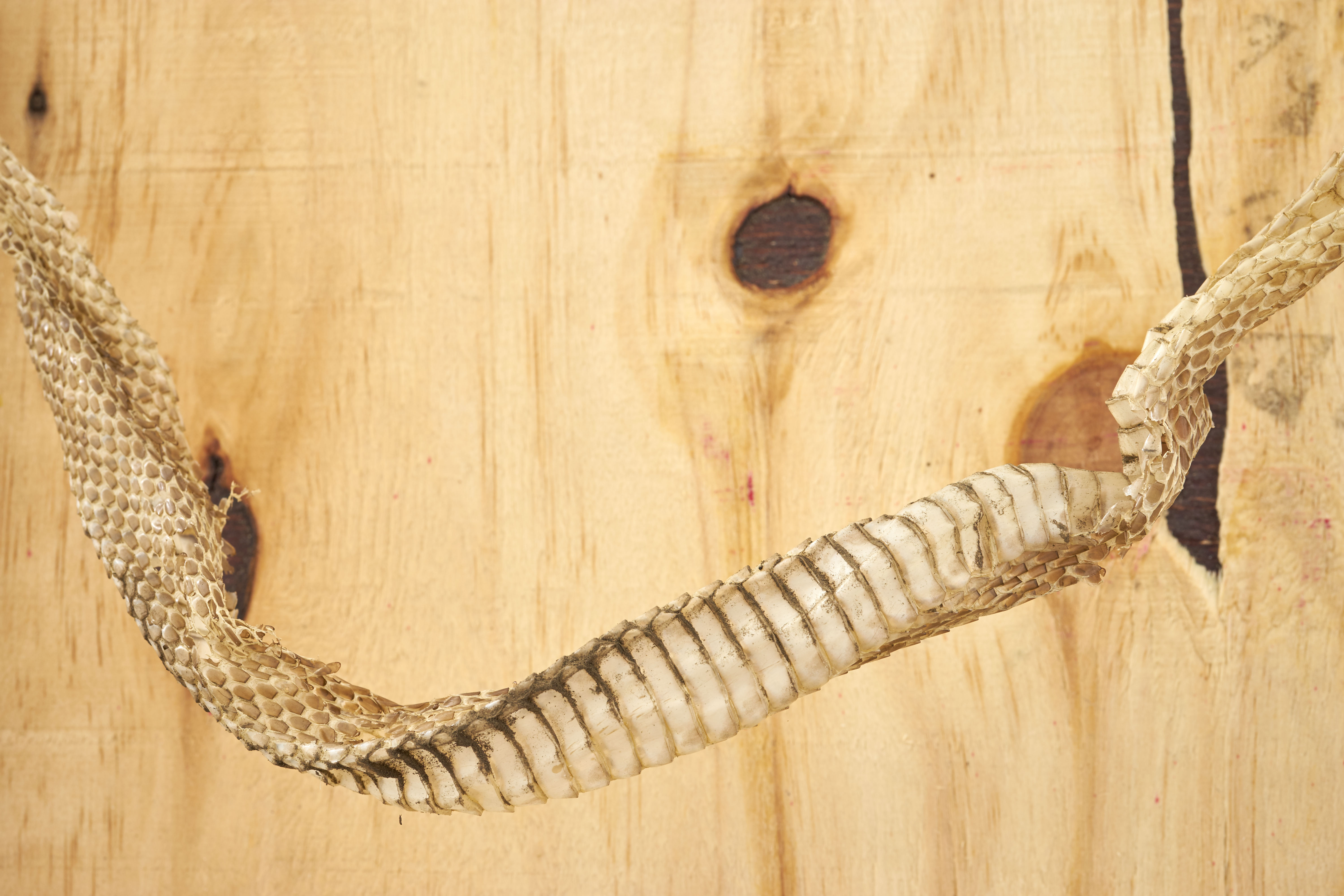 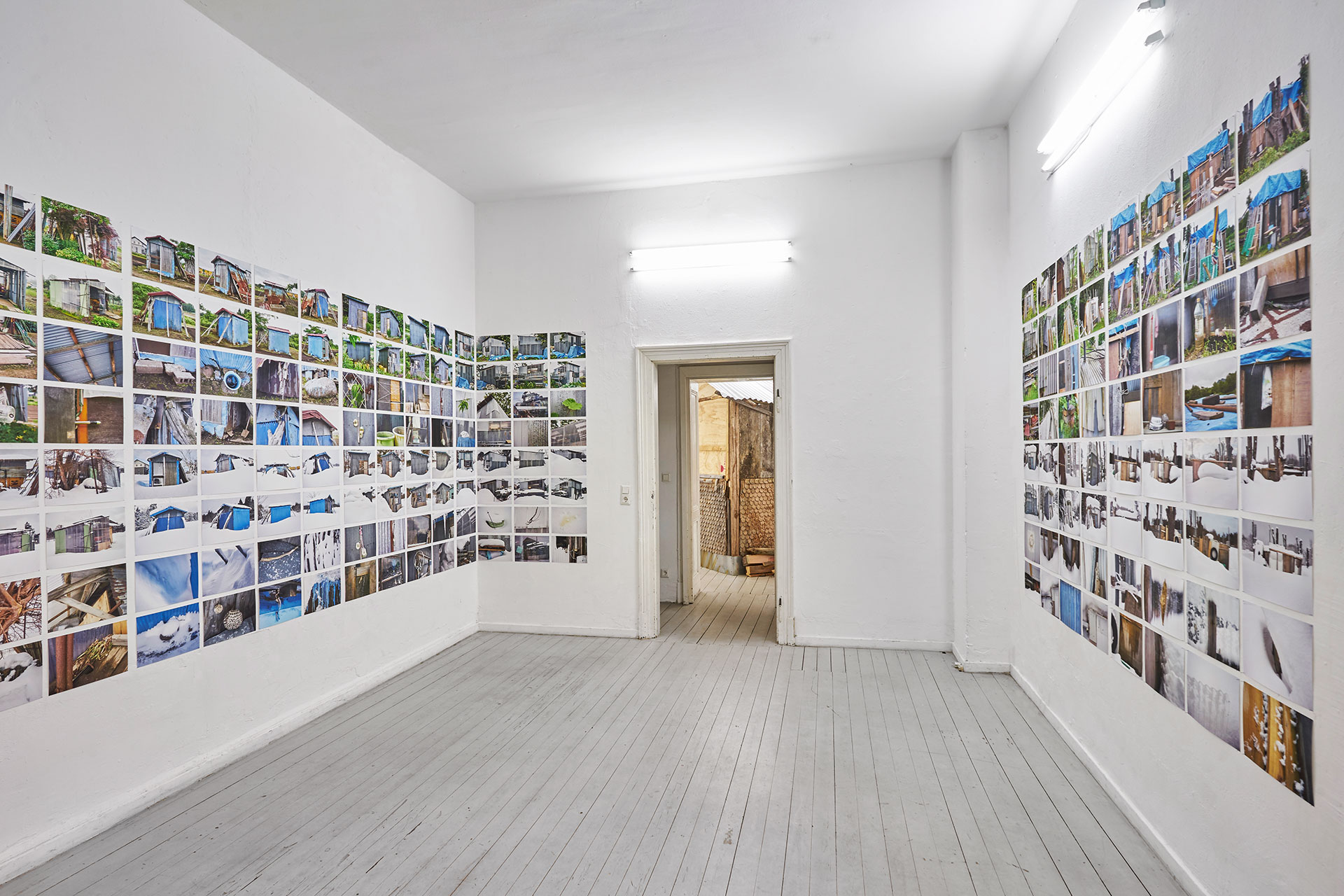 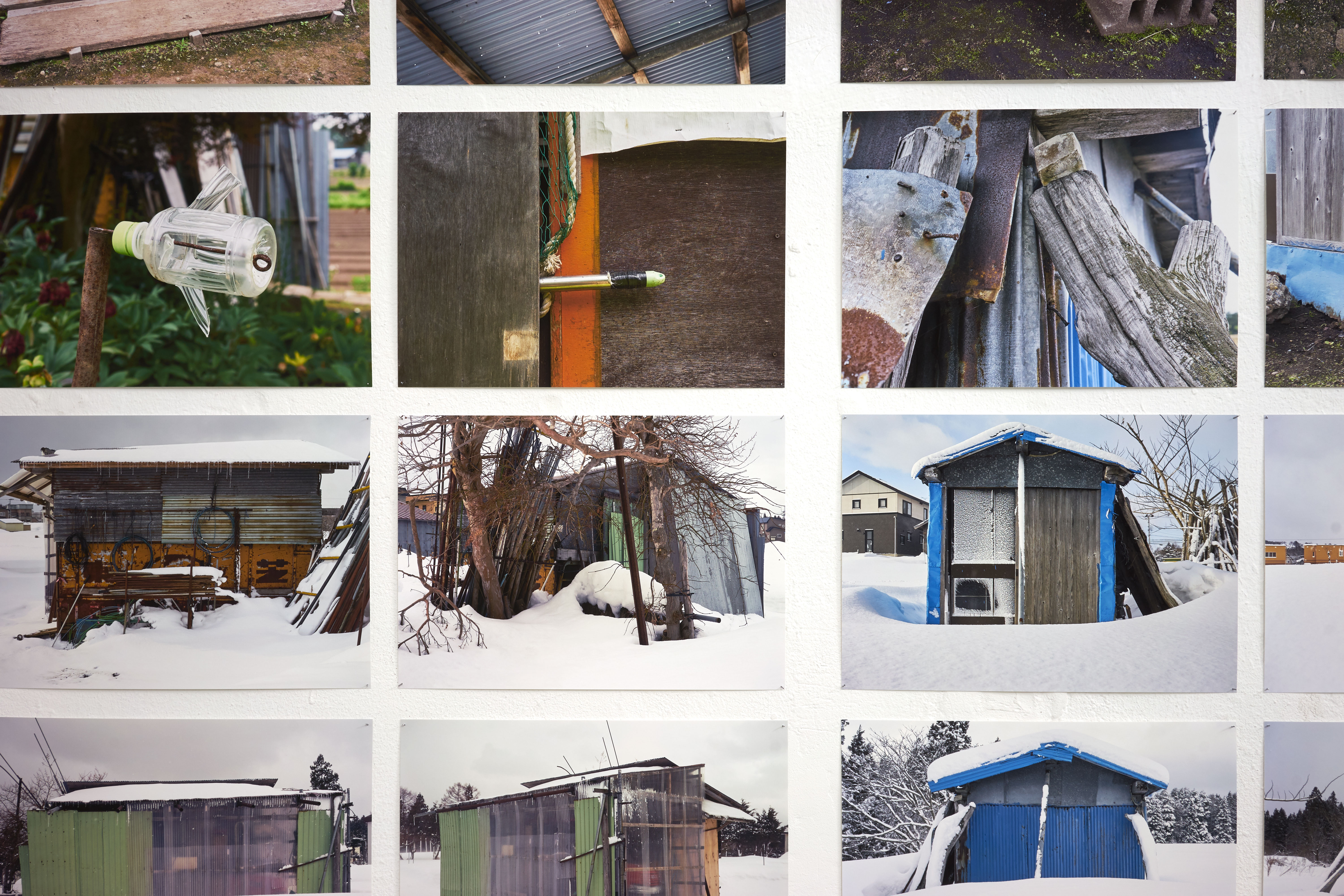 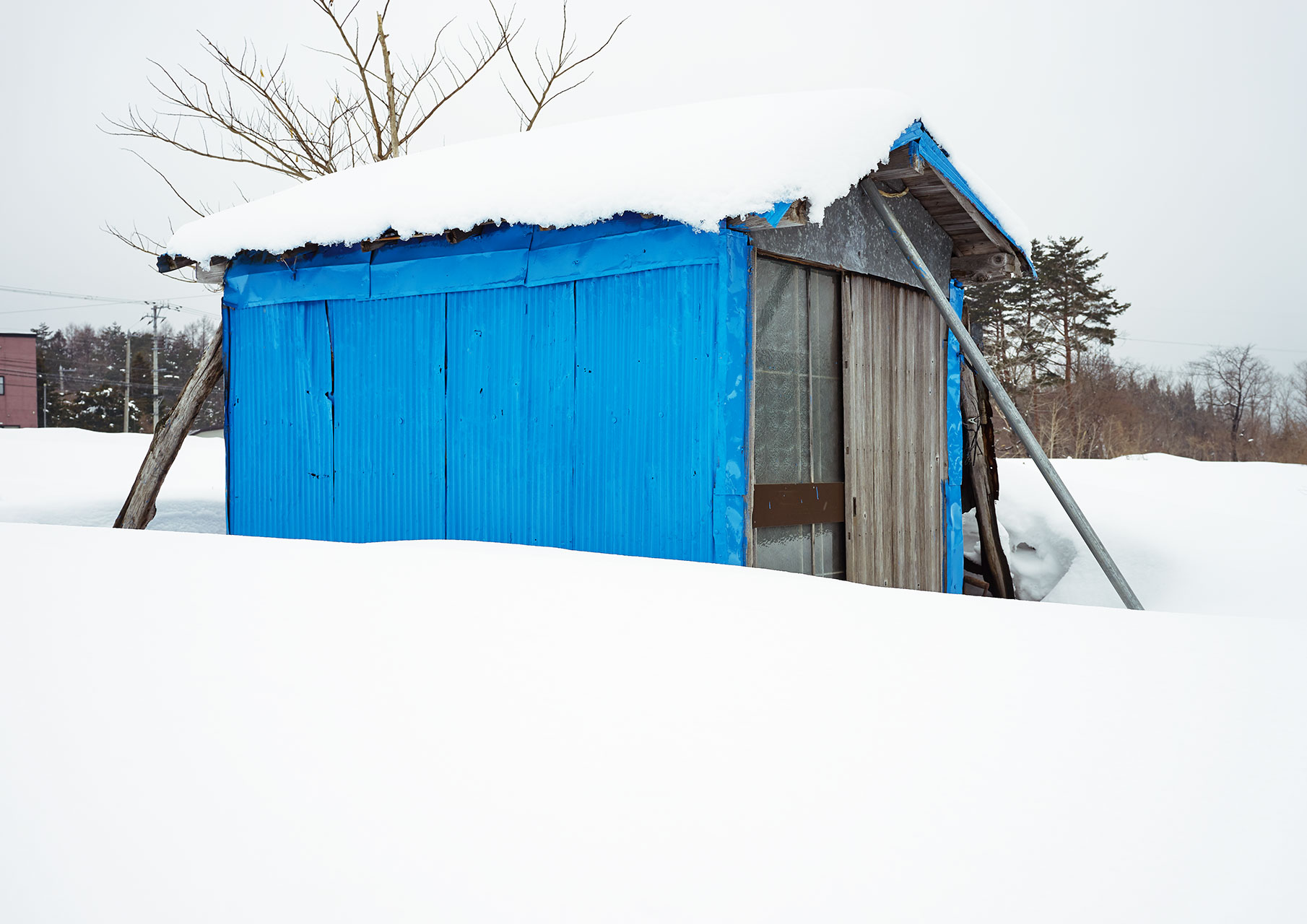 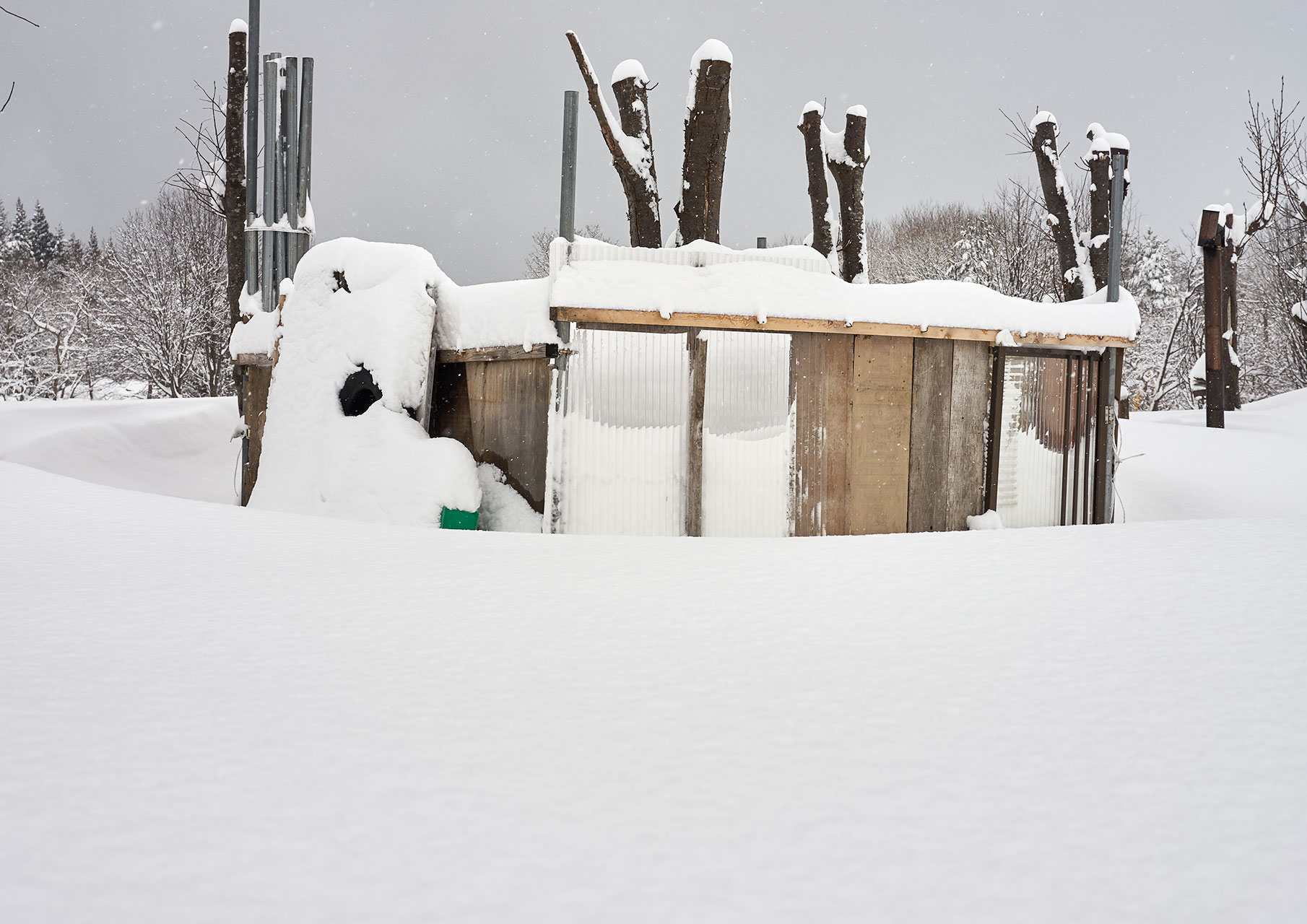 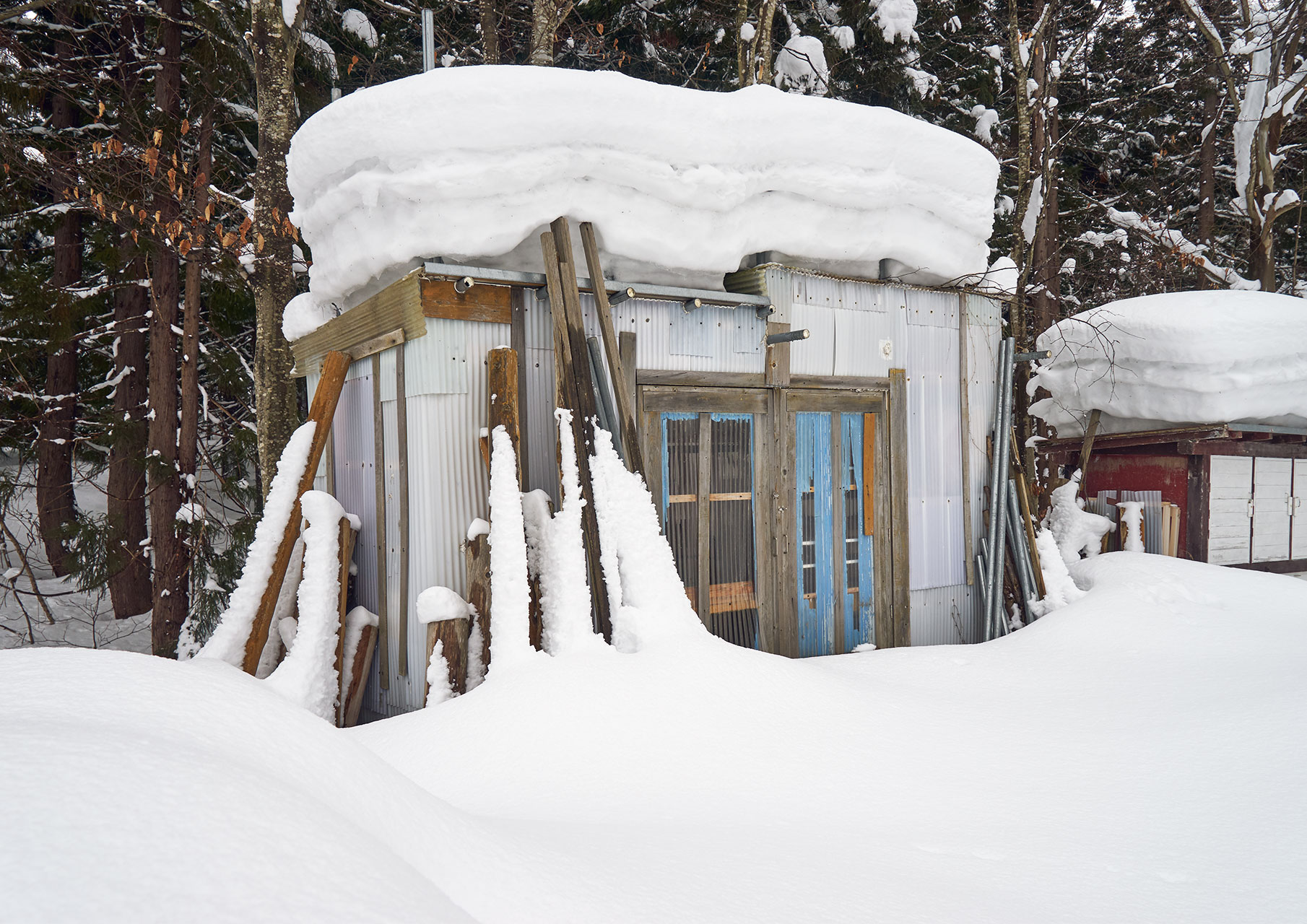 Makeshift, jerry-built, sheds, shacks - I cannot think of any kind words to describe this kind of structure, but it is immediately recognizable as the archetype of shelter.

Joerg Obergfell has been documenting a series of small structures on the outskirts of Aomori in northern Japan. Although of a similar scale to allotment huts in Europe, they are more likely to be farmer's sheds in Japan, where small-scale agriculture is heavily protected, and working rice paddies and vegetable fields are a common enough sight amongst the suburban sprawl of even major cities. Like most agricultural structures, they are not pretty in any conventional sense; they are ramshackle, but still functioning. Typically they are put together from a repertoire of improvised and globally available materials - scaffolding poles, plywood, corrugated iron, asbestos cement sheet, blue plastic tarpaulin, breeze block - that are likely to have been recycled from some other construction. One could see similar things in refugee camps or shanty towns almost anywhere in the world. But it is somehow difficult to think of them as buildings.

There is of course a well established romantic discourse in European art for the appreciation of dilapidated structures, but it is predicated upon a number of assumptions: of grandeur of scale, the ruined object having once been monumental or powerful (as in Bernd and Hilla Becher's famous photographs of 'anonymous sculptures')[1], or of historical importance, the accidents of decay marking the passage of historical time (as in Alois Riegl's writings on the cult of monuments)[2], or that the materials being of a 'natural' kind, will decay as part of 'nature taking its course' (as in many paintings of rustic scenes). In the face of the impermanence of things, these are ways of compensating the viewer with the thought that something - perhaps of a higher or more exalted kind - endures: that history continues, or that nature is eternal.

But none of these assumptions apply in the case of these structures. Their scale is the opposite of grand; in fact they are a reminder of the surprisingly desolate quality of the landscape of rural Japan, when one turns away from the cheerful vulgarity of the big cities (and not just because of the well-reported ageing and depopulation of rural communities - it is a quality already there in some of Hokusai's woodcut prints of the countryside around Edo). The history recorded in the accidents of damage is hopelessly scrambled up; it is impossible to tell whether a broken piece of glazing already came that way from somewhere else, or whether the damage was sustained in situ. The materials are mostly not 'natural'; plastics and rubber and cement somehow have the unattractive property of continually rotting without ever going away.  And 'dilapidated' is already a misleading term because when we look at them closely, and with the passing of time (as Obergfell has done, returning to the same places and paying attention to the same features from one season to another) we realize that they are in fact rather carefully maintained. A perennial adjustment of improvised arrangements, to the way a door is secured with a piece of elastic for example, or a tarpaulin held down with some short planks and a tire, would have been necessary to keep them standing in the face of the elements, just as the fields which surround them must be tended (the winters are severe in northern Tohoku). The kinds of action required - propping, covering, tethering, binding - are not those we think of as being 'proper construction', but are more akin to the labours of agriculture. It is as if one were to apply the techniques of making a thatched roof (actually one of the most ancient forms of construction) to modern junk materials. These structures are held together in the way that bundles of goods were once held together by travellers on their way to markets, or refugees fleeing disaster. They remind us of the precarity of things, even in the face of their apparent permanence, and therefore have an opposite effect to the solace of romantic art. They are also a reminder of some of the 'dirty secrets' of construction, that things only stand up because of a kind of balancing act that plays off the qualities of one material against another; these are structures that do nothing to conceal how they were put together, just as a certain kind of modernist architecture was supposed to show us.

With regard to the permanence or impermanence of buildings, there are some specific cultural circumstances which are peculiar to Japan. It is quite likely that the modest structures which are the subject of these photographs are actually older than the apartment buildings which can occasionally be seen in the background just beyond the fields. Not only older, but actually more permanent. Half of all existing Japanese houses are less than forty years old; it is normal practice to demolish a house and build something new when its occupants die or move on (which is probably where some of the recycled materials seen here came from), and this in spite of a falling population and a shrinking economy.[3]Dwellings are replaced rather than adapted and an old house is usually worth less than a new one. There is an exception to be made in the case of historic buildings, but given the use of timber as the traditional material of construction, this does not quite mean what one would expect it to mean in Europe. Dehio's imperative to 'conserve, but not restore', does not apply and many of the famous temples, castles and palaces have been continually restored in an image of their complete, or 'original' condition - i.e. with respect to form rather than substance.[4]Indeed, the oldest and most important Shinto shrine in Japan, at Ise, is famously demolished and completely rebuilt from new material every 20 years, in order that it may continue to exist in its original condition as an abode worthy of its presiding spirits. One might object (from a materialist point of view) that given the 62 recorded cycles of replacement since the shrine's foundation, some kind of cumulative copying error may have crept in, so that we cannot know (without the material evidence, which is deliberately effaced every 20 years) whether what stands today really is the same structure, in every detail, as the original. But in Japan historical continuity is preserved not so much in physical objects as in the so-called 'living national monuments' who hold and pass on traditional techniques of artistic or artisanal skill (which cannot be changed in any detail). In the case of the Ise the permanence of the structure  is ensured by the master carpenters and other craftsmen who rebuild the shrine, twenty years being approximately the time it takes them to pass on their skills from one generation to the next. It is the techniqueswhich are supposed not to have changed in 1500 years. And the various preparatory stages of replacement - growing the trees, cutting the timber and so on - are ritually extended over years so that the process of renewal could be said to be continuous rather than episodic.

Now it may be a kind of sacrilege to think of the sanctuary building at Ise at the same time as these crude farmers' sheds, but not completely inappropriate: the post-war architect Kenzo Tange speculated that the origins of its style might lie in ancient agricultural storehouses, and its scale is actually very modest, being a simple one-room post-and-beam structure with a thatched roof.[5]Both are a kind of 'anonymous architecture', in the one case because they are sheds made without a plan and with whatever comes to hand, and in the other because its origins are unrecorded and its shape can never be changed.[6]Neither shrines nor sheds can be entered by the passer-by, and it is interesting to note that Obergfell's photographs resort to the same kind of compositions as Yoshio Watanabe used when he was allowed (for the first time) to record the Ise shrine from close quarters in 1953: the structure seen from the outside at middle distance and close-ups of details of the construction (surprisingly ordinary in the case of Ise, albeit of supreme quality- Watanabe's images make it look like a farmer's shed made from the sun itself!).[7]And both exhibit a continuity of ancient practices of 'making do', based on agricultural cycles of time, by which life can be sustained.

[6]'Anonymous architecture' was a term introduced by Bernard Rudofsky for the influential exhibition Architecture Without Architectshe organised at MOMA, New York in 1964.